Finally, a channel on DSTV I can watch

I remember when my family got DSTV and I could go to broke whores at school “Your MNet ain’t SHIT bitch!”.  Recently, however, DSTV has become a bigger disappointment to my family than me introducing them to my friend and ream mate Jabulani. Imagine my delight after learning about the glorious train wreck that is the new 24-hour news channel.  ANN7 (DSTV 405) launched this week and what a launch it was! I wasn’t fortunate enough to watch the mess in it’s entirety, but News24 reports some top class fuckery in addition to the clip available on Youtube. If this is the kind of homegrown Youtube talent bitches were talking about then I retract ALL my previous statements, because this is pure gold!

Everything from the sound to the presenting (including their whore-drobe) was a mess!  Who needs BBC or CNN when you can have … [awkward pause] … Carolyn and Marlien give you awkward silences, some Anne-Hathaway-looking skank mispronouncing names of politicians or the hoes in post cutting off half of the story headline?! I would like to take this opportunity to thank the Guptas for taking African Television to a WHOLE new level of WTF. I love it! Keep up the good work and keep giving Mzansi more of THIS: 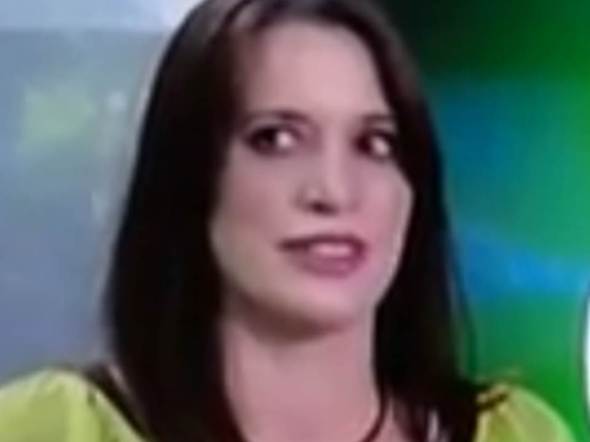 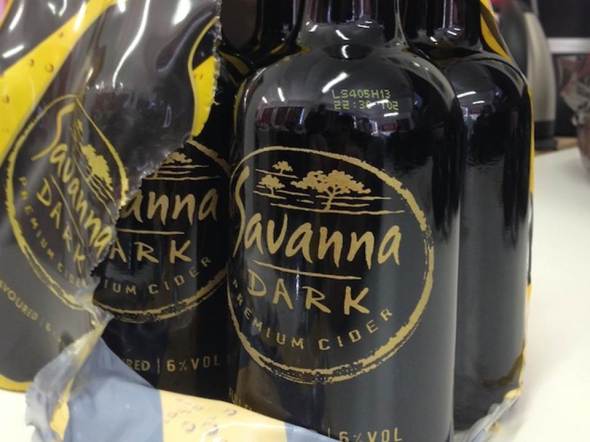 Not only are Distell doing their part by keeping keeping Mzanzi in a perpetual state of Tassenberg induced lull, they also seem to be able to read minds these days.  I say this because of the launch of their latest boxed-wine-in-a-bottle Savanna Dark.  I cannot be the only thirsty whore who longs for something dark and wet down my throat when I’m roaming the Savanna.  Our collective SPULS must have entered the consciousness of the R&D (Research and Development, not rimming and dicking you filthy slut) people over at Distell, resulting in them coming up with this new brand of bullshit.

I call it bullshit because 2oceansvibe report that SD is not yet on sale to the general public but that they have sampled the sweet angel piss and apparently it is the same colour as the regular stuff and only slightly sweeter. The actual drink is about as dark as the sheet in that fucking annoying MAQ commercial.  Distell is LYING to us! They only made the bottle black so that people with an acute case of the Jungle Fever would buy it.  Well I for one wont stand for this fuckery. Does anyone have the number for the hoes you call when bitches false advertise their wares?

Luckily my Discovery was paid up

If my grammar is a bit shaky (everyone reading this: bitch, your fucking grammar is always shaky) I apologize. I’m writing this post on my iPhone from the Intensive Care Unit at Steve Biko Academic Hospital.  Those of you thirsty bitches who follow KNOPKIERIE would know that the last post was of full time spiertier and actor person Ream-me Short. Long story short, we Twatted him, he Twatted back and my pussy exploded.  So here I am, legs in stirrups, after some poor intern was tasked with practicing his skills with a suture needle while sewing my business back together.  They didn’t want me to bring my iPhone in here on account of the risk of infection, to which I responded “Bitch please, my nethers have been exposed to WAY worse!”.

It’s Saturday night and at the expense of any kind of social life for yours truly other than a hollowed out  French polony and my collection of Turkish Wrestling clips, that means it’s time for a KNOPKIERIE.  This week let me introduce Veet For Men spokesjock Ramey Short. Can we all just take a moment to appreciate those silky smooth fuck-lines! (FYI: A fuck-line is not to be confused with a fuck-licence – which whores outside South Africa call a treasure trail – clearly, Ramey’s fuck licence was Veeted into heaven a long LONG time ago) No doubt it was this choice cutlet of prime steak’s aptitude for BODYODYODY that got him cast as Dr. Quinton Meyer in homegrown TV hot mess, Binnelanders.  I watched that show for no other reason than to see Dr. Meyer’s guns poking out from under his tight little hospital scrubs. Speaking of his whore-drobe, does it say “filth” on his hoodie?  Make sure you show him as much love as he shows that tube of Veet every week by cyberstalking him a bit (read: a lot) via @RameyShort. Also make sure your Discovery is paid up to date, because when you see the following images, you are going to want to book a prostate fingering STAT! 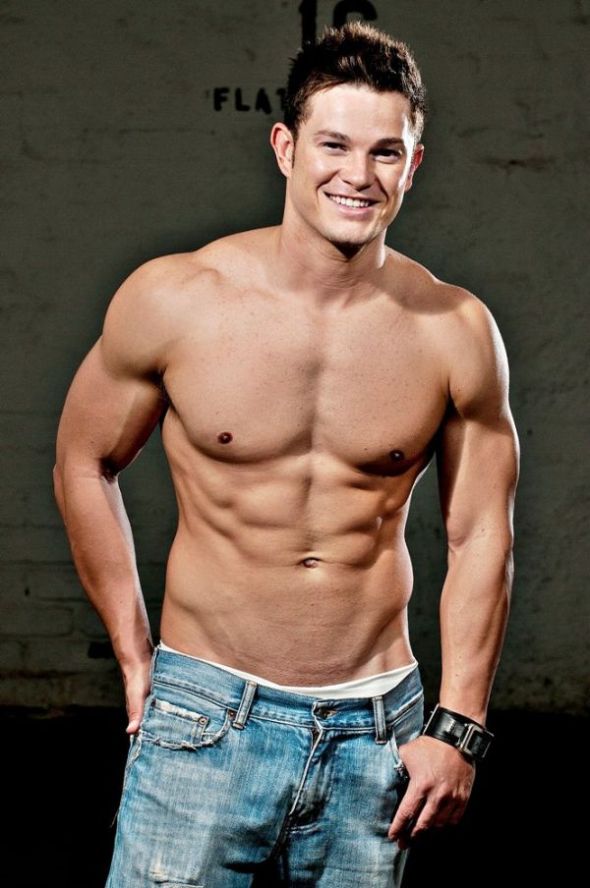 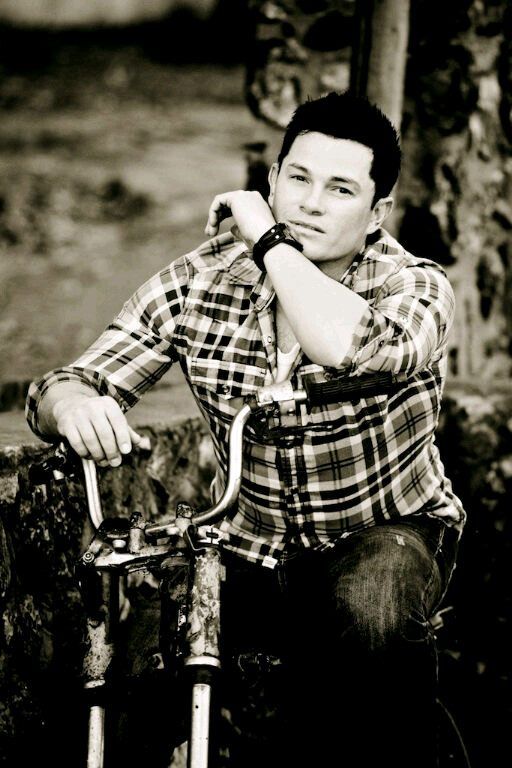 So apparently South Africa is the hot new place to find Youtubers? (Yes, that question mark is supposed to be there, because W the F!?) I’m sorry, but as an avid watcher of the yootoobs, can I add that until we can produce twink-a-licious goodness like that of Jack and Finn, ratchet bitches like Kingsley or ladeez of quite the questionable sanity as Glozell, we still have a long way to go to reach the top of anyone’s list in the online videoing game. If you want to see two chicks (who look like they’ve spent the night being molested at a Long Street backpackers whilst smoking everything they could buy on the street on the way there) hoofing it around Cape Town with Daddy’s old Hyundai TV set, while simultaneously and shamelessly plugging one chick’s brother’s Youtube channel (…and breathe), then press play on this mess. If you don’t like seeing how rapidly your finger will find the BACK button, then rather watch this, which comes to you with the full SIESA guarantee of not being a pile of local horse shit:

Hallelujah! It’s Raining Men! (and The Riviersonderend joke for dummies)

From the evidence that has passed my very own eyes it would seem it is not only raining cats and dogs in the Mother City, but also naked men! Sjoe! The photo above was snapped by a motorist on the M5 highway in Cape Town yesterday. By the look of things this is not our mystery streaker’s first time letting it all hang loose because these eyes don’t see no tan lines! In addition to this, local rag the Cape Argus (via news24), reports that this oke has been spotted as far away as Riviersonderend! Riviersonderend?? This must be the guy from the Riviersonderend joke! First off, if you haven’t heard of Riviersonderend, then just imagine the most remote, one-road, one-post office, NO WOOLIES, NO DRAG CLUB, arm-blanke paradise you can and then times it by 150 because that’s how fast people drive through Riviersonderend after a rapid piss break at the Shell service station. Clear? Now, if you haven’t heard the Riviersonderend joke, here it is (sorry, but it’s only funny in Afrikaans):

Jesus, okay Rainbow Nation! Basically, this dude tries to get directions in Riviersonderend on a Sunday, but he can’t find a soul because everyone is in a potato salad and skaaptjop induced slumber. Then he spots a dude playing with his mielie in an alleyway, and he asks, “Hey, is this River-without-end?” (the name of the town) The other guy responds, “No, this is fucking without pussy!”.

Anyway! back to stormy and wet with a chance of nudity! This is the “fucking-without-pussy” guy! I would stake my last cheese curl on it! The Cape Argus also reports that City Traffic Services could not deal with this man’s Cape Cobra swinging all over the left lane like a leathery traffic boom, so they handed the matter over to the local police. What a bunch of pliggies! Spoiling the fun for the rest of us! Talk about speed humps ahead! 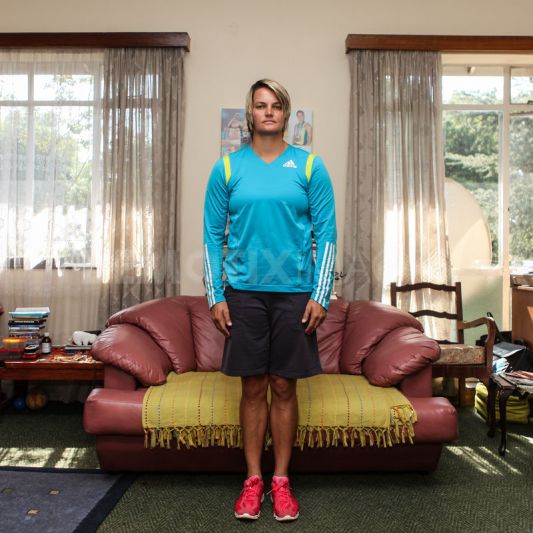 Yes, I know I have expressed a dislike for sports journalism, but this absolutely requires a mention, if for nothing else than letting South Africa and the WORLD know that Jo’burg can just hand in its notice, because Rustenburg is now where South Africa’s new interior design capital is at! So much I need to know: I need to know at what branch of Ellerines or Bears I can get a couch like that (on lay-bye please, and yes, I’ll take the free presswood two-piece bedroom set too!). I also must know who stapled down that luxuriously mossy “shag rug” – and by “rug” I mean that teased nylon in Exorcist-green carpet on the floor. Did it come free with the couch and the bed set? Get me to Ellerines, stat! I’ve seen a carpet similar to this at the very exclusive Club Presley’s in our nation’s actual capital, Pretoria! Cigarettes don’t even scorch it and everything from vomit to Russia’s best vodka can rain down on it without even leaving a stain. That carpet just laughs at your drunk ass… pure class!

Not only is Sunette Viljoen the picture of elegant sophistication, posing in the front room of her parents’ Rustenburg home, she is also a hard working athlete who likes to see hard work pay off – so says Viljoen. Move over Madiba, and get this girl on a R20 note! News24 reports that this spear throwing glamazon progressed to the next round in her morning sessions at the IAAF World Championships in Moscow.  And yes I checked, this is not “another Moscow” this is indeed the Moscow in Russia… so keep those PINK trainers on gurrl, or I foresee some gulag time coming your way. If you don’t know what I’m talking about, go google “Russia” “Olympics” “Gays” and “fuckery” and catch yourself the hell up!